Back in early May we blogged about some usability issues associated with using a smartphone app as a TV remote control and ‘companion device’ in one of the NoTube prototypes developed by the BBC. Since then ‘second screen’ apps for TV have proliferated, accelerated by the success of the iPad and the continued trend for people to use online social networks such as Twitter and Facebook to talk about what they are watching on TV using laptops, tablet computers and smartphones.

With the rise of couch potato multi-tasking (people using the TV and the Web simultaneously), this behaviour has evolved ad hoc as TV viewers used whatever existing apps, devices, tools and services were available. However, as others have pointed out, because people have been improvising with products designed for other purposes, the current second screen user experience has some drawbacks. For example: people are having to focus on more than one screen at a time, their attention divided between the two. This phenomenon of split attention was one of the main themes of the recent 2screen event in London. Also the ergonomics can be awkward; with laptops balanced on knees, small screens, and thumbs typing on tiny keyboards. 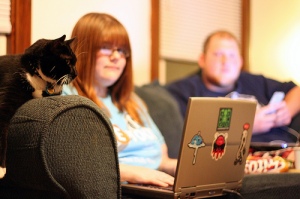 The problem is that the alternative scenario – putting a Web browser on the TV screen – does not seem to be the solution. Although web-connected TVs are becoming more common in the home, from a user’s point of view, using the Web on the TV is an unfamiliar and relatively uncomfortable proposition, and involves the use of very complicated remote controls or keyboards while watching the TV. This is particularly relevant when text input is required: you want it be as easy as possible to join in an online conversation about a programme you’re watching.

In addition to making it easier to read and input text, second screens have several other user experience advantages over a single integrated Web/TV screen. For example, they:

Recently broadcasters and Internet start-ups have started to design Social TV apps specifically for second screen experiences. Several apps and sites (such as Philo, Miso, and GetGlue) have repurposed the check-in concept popularised by Foursquare and adapted it for TV for a shared television watching experience. Other services, such as yap.tv, Starling TV, and Tunerfish are concentrating on integration with Twitter and Facebook. However it is not clear at the moment what these second screen applications give the user that existing tools (such as using Twitter or Facebook on a laptop or phone) do not.

We are currently planning a user study for early next year with our colleagues at VU University Amsterdam to learn more about how the usability of second screens can be improved to create a more elegant experience.

For example, by helping users to:

This entry was posted in Second screens, User Experience. Bookmark the permalink.